A welcome addition to the Information Technology Facility 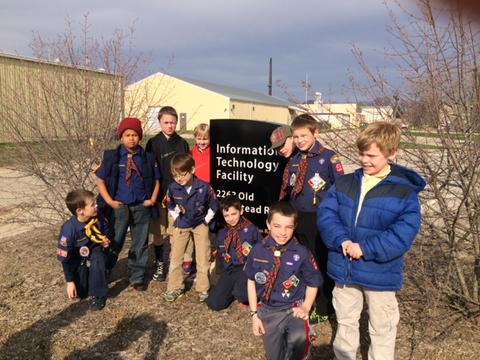 As the first building on campus to earn LEED Platinum certification—the ultimate standard for sustainable design—the ITF has been a popular stop for tours. This year there have been an average of two tours a month, with visitors ranging from top IT leaders from fellow CIC schools to elected officials to a local Cub Scout troop. The ITF was the featured tour taken by the Iowa Chapter of AFCOM, an association for data center and facilities management professionals.

The ITF, which opened in 2012 after seven years of planning and three years of construction, was built from the ground up to house and protect computing and network equipment that is vital to the operations of the university and its hospitals and clinics. The project team knew from the outset that it would be a special place and was extremely pleased with the LEED Platinum designation.

“What we didn’t anticipate was the interest in the facility as a tour destination,” says ITS Data Center Manager Jerry Protheroe. “It has been very rewarding for us to showcase this point of pride for the university, and to tell others about our data center so they can learn from our experience building it.”

Located just inside the interior front doors, the welcome wall is a gathering spot for tour attendees. While waiting for the mandatory security sign-in process, visitors can view stories about the ITF published in Iowa Now and The Daily Iowan, such as an announcement of a $271,854 rebate from Alliant Energy for energy-efficiency, and nominations for awards such as Datacenter Dynamics North America Awards or AIA Iowa Architectural Excellence Award, just to name a few.

“It’s exciting to have a place to prominently display the awards and articles about ITF,” says Rex Pruess, senior director of ITS Enterprise Infrastructure. “The wall is inviting and informative for tour attendees, and it also commemorates several years of work by many UI staff members and project partners who collaborated to build this award-winning facility for the university.”