Two teams of Information Technology Services staff members and project partners are being recognized with Improving Our Workplace Awards (IOWA) this spring. The recipients worked on the Learning Commons, and a Recital Attendance Application for the School of Music.

IOWA Awards recognize employees who demonstrate initiative and innovation that has a positive impact in their workplace. The honorees for these projects received their plaques at a May 5 reception at University Capitol Center, and will be recognized along with all other IOWA Award recipients at an event later this month. 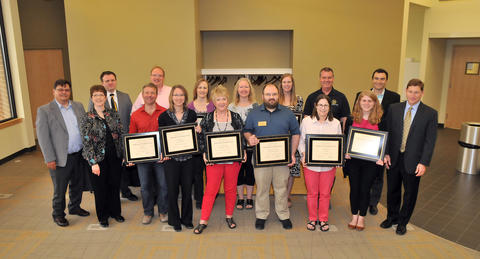 The three-year project to develop, design, build, and implement the new UI Learning Commons was a cooperative effort between the Provost’s Office, ITS, University Libraries, and Facilities Management. The highly complex project renovated 37,000 square feet on the first floor of the UI Main Library to create a facility described as a “tech-infused, comfortable, and flexible learning space,” and “a one-stop academic and information help center.”

Since the space opened, monthly gate counts increased by 14 percent between September of 2012 and 2013, from 114,284 to 131,027. In an average week, over 1,300 space reservations are made by email or on site. Between Aug. 26 and Oct. 30 of 2013, the Coordinated Service Desk handled 24,232 transactions, from technology and reference questions to directions or equipment checkouts.

“This is one of the most impactful projects for students I have seen in 25 years,” says nominator Maggie Jesse, senior director of the Office of Teaching, Learning and Technology in ITS. “It was amazing to go to the open house and see students streaming in before the semester even started, and I hear people say every building needs a space like this. The team delivered a big vision in a big way.” 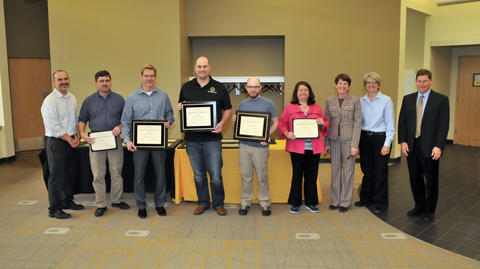 The Recital Attendance Application team consisted of seven UI employees: Lance Bolton and John Winget of the College of Liberal Arts and Sciences IT group, Steve Bowers, Logan Dewes, and Ted Fitzgerald of ITS, and Kathy Reeves and Kate Thompson of the School of Music.

A large Recital Attendance course enrolls 300 students each semester, and for years a paper card process was used to track their attendance at music performances. The School of Music dreamed of automating the process, which was labor intensive and fraught with errors and fraud, but when they explored the possibility in 2006, there was no cost-effective way to do so.

That changed in 2011 when students received Iowa One Cards embedded with their information. The project team developed a foolproof attendance station where students can securely and quickly scan their ID cards to take their own attendance as they enter and leave a performance. It was installed at two performance venues, and a new portable system was developed and is in use at other facilities.

The new, more efficient system significantly reduces staff time spent on data entry, increases accuracy, and allows students to immediately access their attendance records. And, the project team is certain that other large attendance course or events will be able to use the system down the road.

“We were able to build this system—which makes a world of difference to staff, students, and anyone else who interacted with the old paper process—for $660,” says Kayt Conrad of the School of Music, who co-sponsored the nomination with Romy Bolton of ITS. “That speaks to the creativity and brain power of this group, and the desire to stick with it and get it done. They are very deserving of this award.”