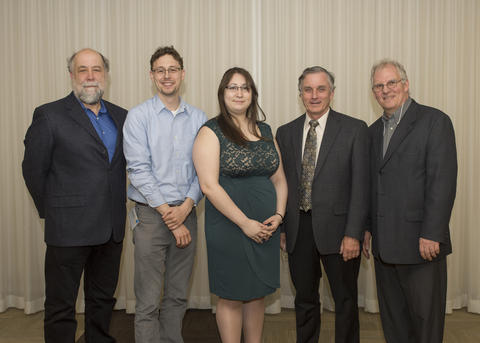 The award was presented to (photo, left to right) Les Finken, Steve Tomblin, and Sarah Mascher from Information Technology Services, and Jerry Moon, professor of Communication Sciences and Disorders in the UI College of Liberal Arts and Sciences, at the Celebrating Excellence, Discovery, and Innovation Awards Ceremony sponsored by the Office of the Vice President for Research.

Moon worked with ITS many years ago to develop the web application, Tomblin and Mascher developed the mobile app, and Shannon Sheehan (photo, far right) of the UI Research Foundation and Finken handled the licensing for the Google and Apple App stores.

The mobile version of the web app was released in early 2014, building upon the UI phonetics website that has become an incredibly popular English as a Second Language (ESL) teaching tool.

Of over 6 million results in a Google search of the term phonetics, the "Phonetics: The Sounds of Spoken Language" website ranks first, averaging 5,000 visits a day with visitors from over 180 countries. The site provides animated libraries of the phonetic sounds of English, Spanish, and German so visitors can listen to each individual sound and watch how a speaker’s muscles move to form it.

Given the popularity of the English component of the site and the rising use of tablets and smartphones, the next logical step was to develop a new mobile app. During the fall of 2012, Moon applied for and received funding from the Innovations in Teaching with Technology Awards, administered through the Academic Technologies Advisory Council (ATAC), to create the mobile version, “Sounds of Speech™”, and partnered with Information Technology Services (ITS) to build it.

“Offering the Sounds of Speech™ app as an on-demand learning tool through an easily accessible mobile platform puts this excellent resource at learners’ fingertips wherever they might be, without the need to have a laptop or traditional Internet connection,” Moon says.

Sounds of Speech™ can be downloaded through the Apple App Store and Google Play for $2.99.

While Sounds of Speech™ is certainly not the first mobile application developed at the UI, it does represent a bit of a milestone in the university’s mobile development efforts. A number of students and startups have commercialized mobile apps born at the university and the UI makes apps focused on the campus and its activities freely available, but Sounds of Speech™ is the first one to be commercialized directly by the UI.